A nation rises up to defend its women

A few days ago while many were preparing to celebrate the solstice and a significant cosmic event, a girl was gang raped in a moving bus in Delhi and then thrown of the bus. She is now fighting for her life in critical condition in hospital. (we now get the sad news that she has passed away) 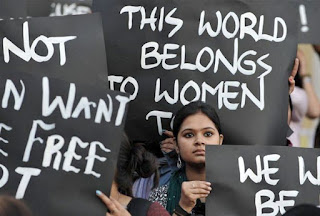 It is not the first time a girl has been ganged raped in India and unfortunately, it probably won’t be the last. Every 20 minutes an Indian woman is raped and this is counting only the reported cases. It is known that more cases go unreported, for fear of the social stigma and having to deal with the police, who often rape the victim again.
What followed this rape though is something new.
Hundreds of thousands of youngsters, all over India, came out to the streets to voice their anger and outrage.
As I write this article. The police are in pitch battles with thousands of students on the streets of Delhi. 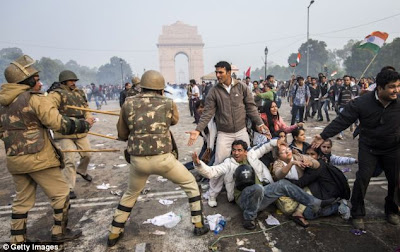 The young people have had enough. They don’t want to live anymore in a society and a culture that somehow sanctions that a woman’s place is at home, and once she is out on the streets, she does it at her own risk.
I truly salute this young generation of Indian’s, who are brave enough to stand up in the face of police violence and make their voices heard, laud and clear. 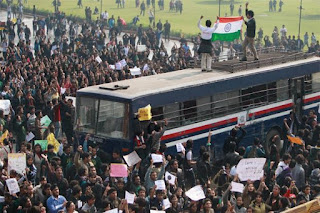 What is truly disturbing is the brutality by which their protest is being suppressed and the biased media coverage associated with this.

On the first day the media supported the public outrage, and as though outrage has a timeline and should be contained for a short brief media appearance – the media has shifted sides.
Off course they did; the media is a puppet of the corporations and prolonged protests disturbs economic activity. 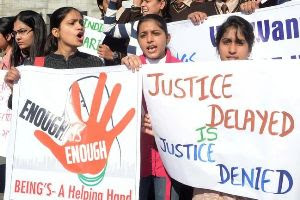 India is a very complex democracy and in many ways is not democratic at all. More then half members of parliament have criminal cases registested against them – some of them rape cases.

It is common knowledge in India that any girl would be terrified to go to the police to complain about rape, in fear that the police would rape her as well or just dismiss the case.
A woman in India once told me, that the men she really feared, when it came to crimes like rape are the police.
And now the police blame ‘anti social elements’ for inflaming the anti rape protests. Sounds very familiar, as we in the west use ‘terrorism’ and a ‘threat to national security’ as a reason to suppress any meaningful dissent.
What is wrong with these politicians? Don’t they have hearts that beat like our own? Is their blood of a different colour? For how can they condemn the outrage of nation, irate by the vile attack on one of its daughters!
Off course, in the name of law and order these protests will be suppressed, though in the name of law and order, rape still goes on unchecked and mostly unreported.
As these protests goes on, the Russian prime minister in town, signing arms deals worth billions of dollars, while half the children in India go to sleep hungry. Isn’t this rape too? Rape of the lives of children who go to sleep crying in hunger night after night, mostly girl children, as the male child is always looked after with more care, in a society that kills millions of girls while they are still in the womb. 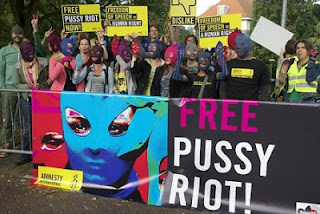 And yes, this is the Russian Prime Minister who imprisoned 3 brave girls from a band called ‘Pussy Riot’, for standing up to his dictatorial ways.

We will never stop the rape of our women, while we continue to rape the earth, rape our freedom, rape our society and starve our children…all in the name of the creatures called economy, power, greed and fear.
Another world is possible, and yes, we may have to take to the streets, again and again, until the ones in power start listening. 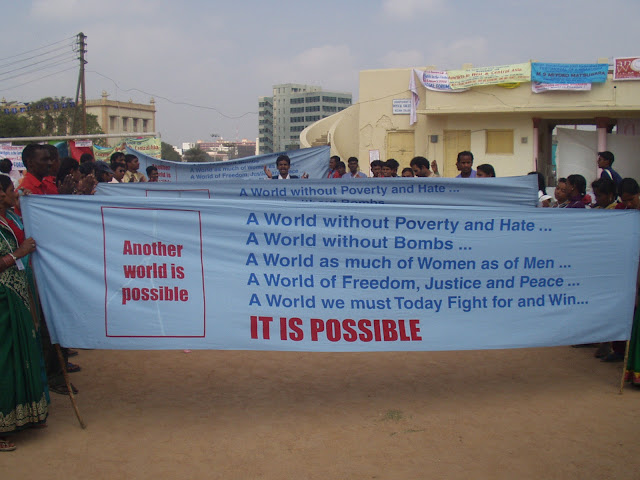 December 2012 Solstice – and the day after 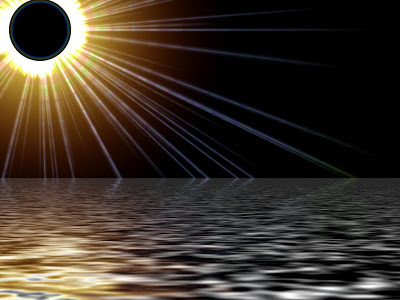 At last it is upon us. The grand alignment. The shift of the ages. The age of doom. The end of time. The conclusion of the Mayan colander.
Wow. Perhaps we should all take a deep breath out, since like any grand event, many of us are going to end up disappointed.
One of the reasons we seem to put so much emphasis on certain dates, where we hope some great change will occur – is our own yearning for change.
Many say it is the end of the world as we know it, perhaps they say so, because they wish it would be the end of the world as we know it.
Non of us are really happy with the way the world is moving along, with the way societies have turned into economies and with the structures of power that rule our lives.
At the same time we have lost hope that it is within our power to affect the change that we so desire to see, hence we hang onto dates and events that we hope will usher in the new age.
We all seem to be hankering for some form of messiah to come in and announce the rebirth of the earth.
By hanging on to hope in dates and events, we do what we do best – we continue to delay taking any action.
Well, a messiah is not going to come and the sun will rise on December 22nd 2012.
Yes, for sure, great energetic movements are happening on earth and throughout the universe, though this does not absolve us from the need to act, if we do desire to see the change that we so much dream about. 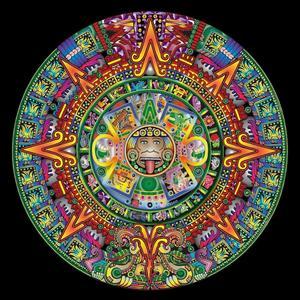 Solstice, be it this one or any other one, is a good time to affirm change and renewal. And a solstice as this one, coupled with the sun aligning with the Milky Way, is definitely a powerful time to plant a new intent into the winds of change.
Let us anchor our intention, that we will be co-creating a new world of harmony and love.
Let us shed the illusion of fear and separation, as a snake sheds its old skin with the coming of summer, and let us embrace the reality of oneness and love, as our new guiding light in the future we are creating now.
Anther world is possible, right here, right now, and we will celebrate her coming together. 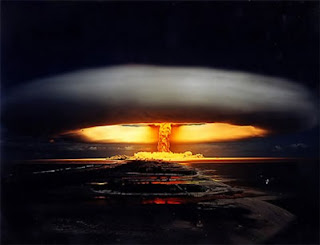 20 school kids die when someone who couldn’t deal with their own pain, decides to go and inflicts pain on others.
Disgusting and my heart goes out to these little kids and their loved ones left behind to grieve.
The news channels all over the world are a buzz and Obama cries on TV.
This hypocrisy is disgusting too.
What is it? Are the lives of American kids more precious then the lives of Afghani kids killed in your drone attacks Mr Obama?
Are the lives of Palestrina kids of less value, when they are murdered by US made weapons, that no one in the white house sheds a tear?
And what about the lives of half a million Iraqi kids – killed by sustained American bombings and sanctions during the gulf war. How is it, that the media displays more shock at the massacre of 20 American precious lives then half a million Iraqi precious live – innocent children, still to taste the glory of life.
How racist is our media that one life does not seem to equal another life?
I don’t like this, it’s just not right. We need to tremble with indignation at any mindless killing-taking place, and we need to address the root cause of these issues.
Forget about gun control in America since first; it’s never going to happen and second; it’s not going to help.
When people lose all sight of deep and decent values. When they watch their leaders talk of nothing but money and power.
When state sanctioned murder happens every day and glorified by the media – how are we ever going to stop these types of insane actions by individuals?
It’s time for a total change and realignment of our value system
It’s time to take out all the violence from our media, so we don’t teach children that killing is a way of life.
It’s time that our leaders practice the ways of the peaceful warrior as a sign of strength.
Its time that we make our militaries smaller and our education systems, a place where right-livelihood is taught.
Actions like this massacre at a school in Connecticut should be a wake up call for us – that something is really rotten with the way we live.
We teach the children by example, and the young man who committed these atrocities, had probably been saturated with violent images from the time he came to the world.

Another world is possible, a world where we take responsibility – in other words – where we are able to respond in a creative way, in order to eradicate the root cause of suffering.
A world where the hunger for power is replaced by the power of love.
So please Mr Obama, stop the blame game and start looking how is it that your government and system of values are contributing to actions that are so out of balance with human dignity and love.