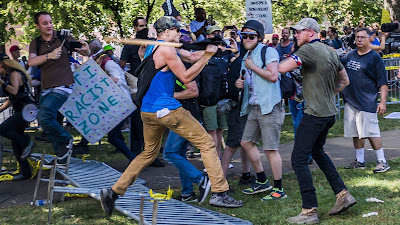 We all come from the earth, and we all eventually turn to earth again. So anyone, and I mean anyone can change, reform and become a force of good in the world.
There is a famous story in Buddhism how a mass murderer comes to the Buddha, and by the love and compassion of the Buddha turns into a saint.
Racism is raising its ugly face again, as it has done time and again through HisStory and somehow it feels like we are writing a book with a new law, that violence is cool when you are on the right side of the argument. I am disgusted, the political correctness around these events has gone a step further, to a place that only one truth and only one point of view is accepted. Actually, only one narrative is allowed to be voiced and discussed. Sadly I see that the ones that use to be the force of good and hope in the world, are being manipulated like puppets by the powers that be, for their own agenda, while hate and intolerance are growing on both sides. And yes, I repeat, on both sides.
First and foremost the events in Charlottesville were somehow a stark reminder that we live in a world were basic hatred and bigotry are still prevalent amongst many people. A hatred that has been preached by many who now suddenly condemn it with alligator tears.
I might disappoint many of my readers. I don’t hate racist people and I don’t even want to shut their mouths. I want to engage them in conversation, in dialogue and find some common ground and go from there. 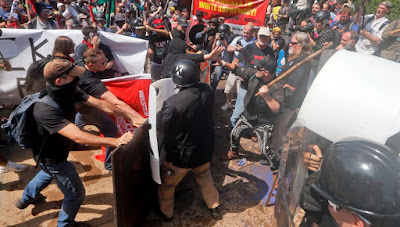 And yes, if any racist person would try and hurt someone, I will attempt to stand in their way, though I would not block them from expressing their views. Why? Because I don’t want to be right by fighting wrong. I want to go deep into where this wrong has its breeding grounds and try and change the landscape there.
It might feel strange to some, though I have a question to the ones amongst you who want to go and bash and destroy the so-called racist assholes? Do you want freedom? Do you want democracy? Do you want true freedom of expression? Then if you do… until someone does not attack you, he or she has a right to express their views, however uncomfortable these views are, or however, insulting they are to a decent human spirit.
I hate to agree with this man ‘Mr Trump’ who I deeply dislike when he said that the violence in Charlottesville came from both sides. I looked at the footage quite a few times and saw the so-called leftist, were ready with baseball bats to fight the racist marchers and were engaging them.
Is this a way that would resolve anything? Would this bring change to the world? Or as Gandhi said, ‘an eye for an eye and a tooth for a tooth would only make the whole world blind.”
Sorry, but fighting fire with fire is not going to work here, not at all, and it is going to give us the opposite result of what we want. It is going to perpetuate more racism and bigotry in the world. I have been quite surprised by the amount of support that was extended to violence against the so-called Nazi marchers in Charlottesville. It could have been more powerful to hold a silent countermarch, just standing in silence, observing and shaming the ones who see one human being superior to another. And would an innocent soul lose her life, if the opposition march was silent rather provoking? This we will not know.
I am no stranger to racism. I was born in the Bronx, where all of us minority groups were racist against each other and living with each other at the same time. It was a different form of racism, it was bad, but wasn’t deadly. And many times it dissolved because people were engaged with one another, that in the end, they saw there was no ghost with horns in people from other cultures and backgrounds.
I kept watching and observed that the racist phenomena existed wherever I lived,
I was formed into being in Australia where my aboriginal elder who took me under his wings of light for a long time, used to say to me almost every day. ‘Never hate anyone’ ‘their heart is made of clay like yours’. He was a shining example of forgiveness. White people have massacred his people and their way of life destroyed, though he refused to jump into the sinking boat of hatred and revenge. By his forgiveness and love in every situation, he brought many whites and blacks together and converted many racists into decent human beings with the power of love.
We need to watch and learn, and see what way really works, what road really changes hearts and minds.
In the last 7 years, I spent a lot of time in eastern Europe, only to witness again what I call the real nasty racism. This total hatred for gypsies and Muslims and Jews.
I also came to learn that a lot of my friends there had racist points of view. I had a choice, to shun them or engage them. I chose to focus on their humanity, and in some instances, by offering them a different point of view, they dropped their inbuilt racist outlook.
I remember years ago when a friend of mine in India Dinesh used to host this total asshole racist American Vietnam vet almost every evening. One day I asked him why he is so nice to this asshole by keeping inviting him over, night after night.
He smiled at me and said, “ Baba, I am slowly making an operation on him and opening his heart, and one day I will go inside and change him” pointing a fist into the air as if he was going into the heart of the other and opening a door’, while smiling with victory.
To do something like this we need much more strength of character than to throw bricks at people we disagree with, people who might have even massacred our ancestors.
Do you know that some of the most vocal campaigners against racism in the US are ex-clan members? Do you get what I am saying? Everyone has a heart, and that’s the space we need to aim at, rather than the hysteria being generated at the moment.
We have to decide now; do we really want another world - another way? Do we? Because if we do, another type of warrior needs to emerge within us, a warrior that acts rather then reacts. A warrior that looks ahead at the results of their actions, the long-term outcome, rather than the satisfaction of getting something off our chest.
Another world is possible, she is asking for our hearts and wisdom to lead the way. 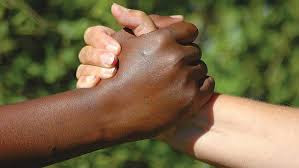